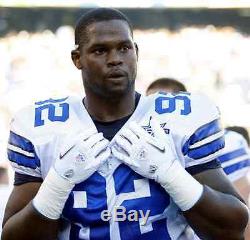 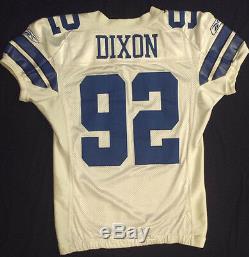 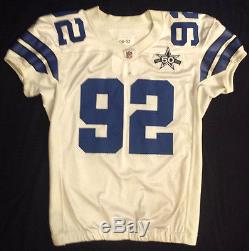 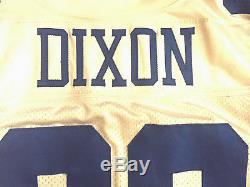 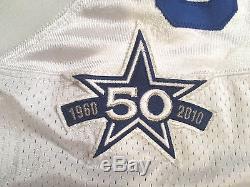 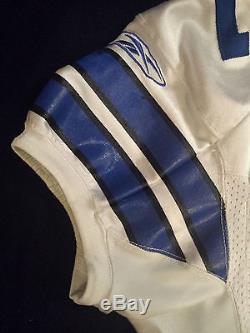 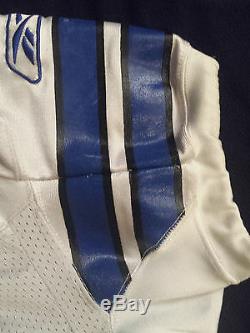 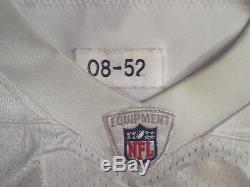 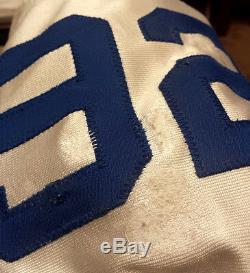 This is for a GAME WORN jersey of former Dallas Cowboy DE Marcus Dixon#92. Reebok branded, made in Berlin, WI. This is a siz e. The 2008 date is not an accurate indicator to when this was issued as it was clearly worn by Dixon during the 4 week span during the 2010 preseason.

This jersey comes with the customized c inch ed sleeves and shortened torso length that many players often prefer. The shortened jersey length is a team customization that has the jersey cut just below the waist then neatl y.

Hemmed with an elastic band sewn in to keep the jersey neatly and securely in place. This also has the unique "Dallas Cowboys" customization of a small reinforced section on the front. (above the front numbers) with a small hole for the players to secure the jersey to their shoulder pads. Not just game issued, but without a doubt Game WORN (team repairs clearly evident on shoulder area). In fact, since Dixon was released from the Cowboys on Sept 4, 2010, he could have only worn this jersey briefly during the 2010 preseason (when these pictures were taken). Again having the team repairs evident, make it VERY likely that our jersey offered here is the actual one he's wearing in our three game pics. These are the genuine NFL jerseys that the players actually wear in games.

These were never intended for sale as merchandise, but for player use. What's the difference between a game jersey and other types? These feature full sewn on numbers and names and much heavier duty stitching than jerseys for the general public. Also because this jersey is specifically fitted for the player, they will fit a little tighter than ones you are used to at the Pro Shops.

Although these jerseys are fitted to allow for the player's specific padding, they otherwise want their jerseys to fit tight, so as the opponent cannot grab or pulled them down by the jersey. What is the difference between "game issued" and "game worn" jerseys?

Game issued jerseys are jersey issued to the players that have the specific modifications i. Cutting / jersey trimming, custom options that a player may want before wearing it in a game. Is that "game worn" is actually used in a game. Obviously "game worn" will commonly have tears, repairs, and stains (sweat & even blood).

Since "game issued" were probably never worn in an actual NFL game, they often will appear as new. What do the numbers on the inside collar mean? The first number is the year the jersey was made.

The second number is the size. It is common that a jersey made in one year isn't issued until the following years, so don't be concerned to see a 2010 jersey made for a player that didn't join until 2011. Why do they seem to come in different sizes for the same player? Players request what sizes they wish to have their jerseys in and then request size options for weather, extra padding i. We were told Tony Romo had jerseys available in almost all different sizes just to have options. How did you obtain this?

These have become surplus because Reebok is no longer the provider of NFL equipment as Nike took over after the 2011 season. Therefore all the Reebok items are no longer used by the team. We have (and will have much) more similar NFL / Dallas Cowboys related listings in the future. Thank you for viewing our items.

Since 1994 we have offered all manner of collectibles, but we specialize in vinyl LP records. The item "Marcus Dixon Authentic NFL Game WORN Issued Jersey Size 52 Dallas Cowboys" is in sale since Friday, May 27, 2016. This item is in the category "Clothing, Shoes & Accessories\Men's Clothing\Activewear\Activewear Tops".