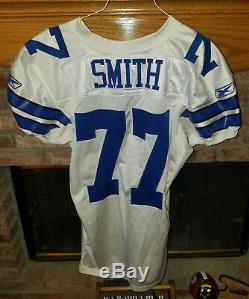 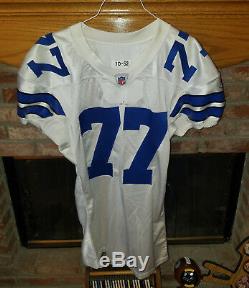 Offered here is a 2010 Home white Reebok size 52 Dallas Cowboys Team Issued-Game Issued jersey made for All Pro Tackle, Tyrone Smith to wear in a NFL game. The jersey has tackle twill "77" on the front and back and on both shoulders, plus "SMITH" tackle twill on the nameplate. Also featured on the front of the jersey are Reebok logos on both sleeves, "10-52" tagging in the collar, and the NFL Logo Patch. The item "DALLAS COWBOYS TYRONE SMITH 2010 REEBOK HOME TEAM ISSUED GAME ISSUED JERSEY" is in sale since Sunday, July 1, 2018.